Being a new citizen of Georgia, I’ve relished experiencing its culture for the first time. From chicken farms to the great BBQ debates to the local pro wrestling scene (more on this later, I’m sure), it’s all been dazzlingly interesting. So much so that I’ve decided to make my observations a semi-regular feature of this blog. How our patron saint Matthew Arnold fits in, Lord knows. Perhaps this is the anarchy part of Culture and Anarchy.

Episode one is the Georgia Guidestones (pictures by Yours Truly). 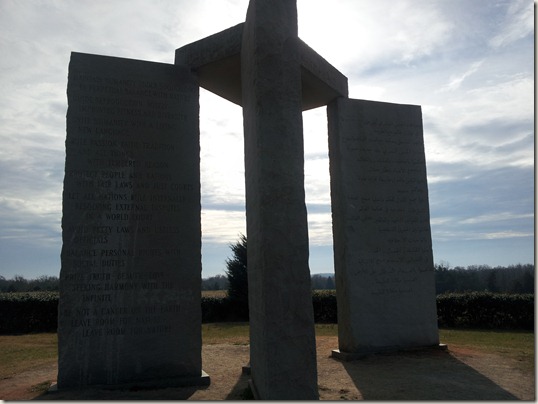 For those of you unaware of this cultural oddity, the Guidestones are a Stonehengey-like monument located in a field in rural Georgia (happily only 20 minutes from my house!). They were anonymously designed and constructed by a man known only by the pseudonym R.C. Christian, and their purpose is a source of vast controversy and eschatological speculation. I first saw this monument on an episode of Brad Melzer’s Decoded (back when that streamed on Netflix) and was excited to find out that I would be neighbors with a menacing sign of apocalyptic doom.

To quickly summarize, the big issue seems to be a combination of the apparent Rosicrucianism indicated by the Guidestones anonymous patron (R.C Christian –get it?), and the strange message the stones convey. They basically lay out 10 commandments for a new world order. 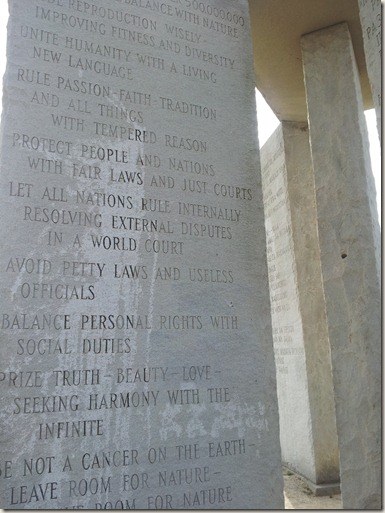 Unfortunately, my photo cut off the Big One – the first commandment, which is to “Maintain humanity under 500,000,000 in perpetual balance with nature.” This of course implies bad news for the New Earth’s 500,000,001st person. It also stokes fear among the conspira-rati, who see New World Orders and secret societies under every anonymously-engraved rock-and-bull story. The Guidestones do, in fact, have a rhetoric of ambitious power carved into its Elbert County granite. But – and not that I don’t love my new home – how this monument is supposed to guide a new race of Super-Men from a desolate field in rural Georgia is a question I haven’t seen an adequate answer to yet.

The nifty part of the Guidestones is its design, which in all honesty is pretty cool. The message is carved in eight contemporary languages and four ancient ones on granite tablets that would make Charlton Heston (and Mel Brooks!) proud. Here are some assorted views: 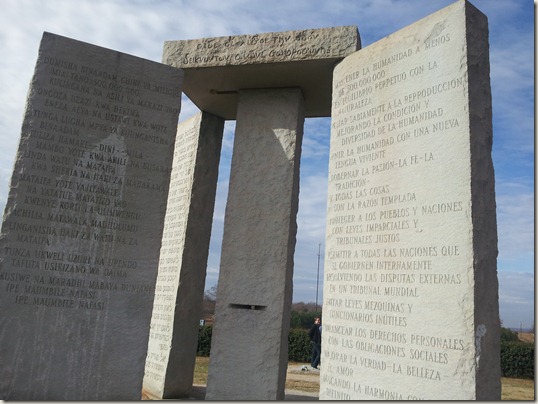 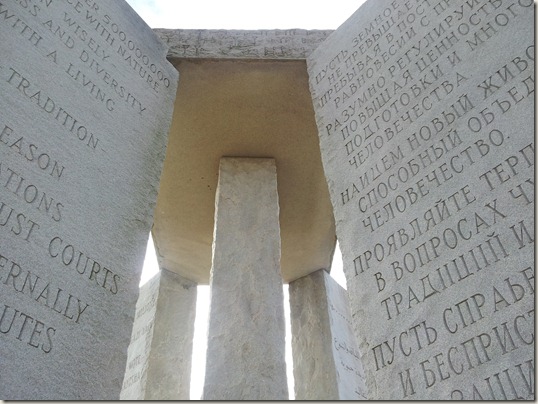 And one with my daughter climbing on them (of course – what else would she do with such a thing?). 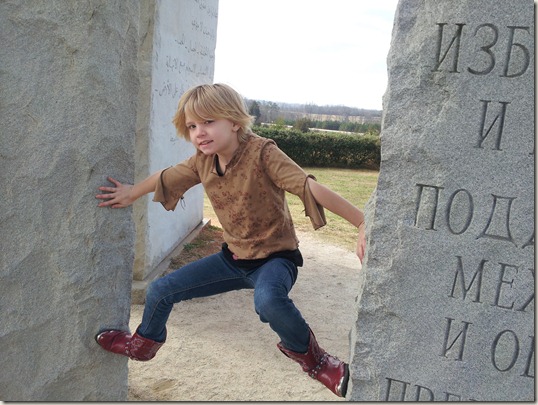 So billions of those searching for enlightenment can find it handily translated into their native tongue. Again, though, just how many speakers of Swahili and Russian will pass through Elberton, Georgia looking for “Guidance,” I’m not sure.

In addition, there are astrological – excuse me – astronomical alignments (that sounds so much more scientific) built right in: 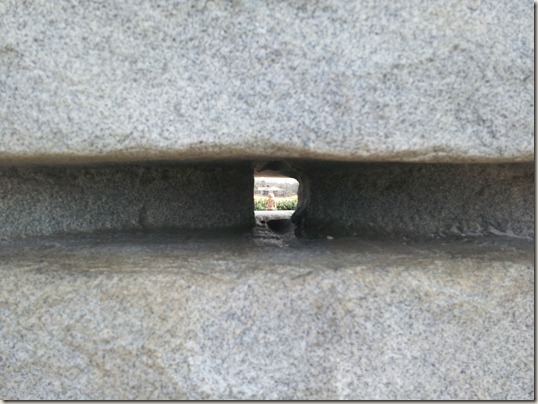 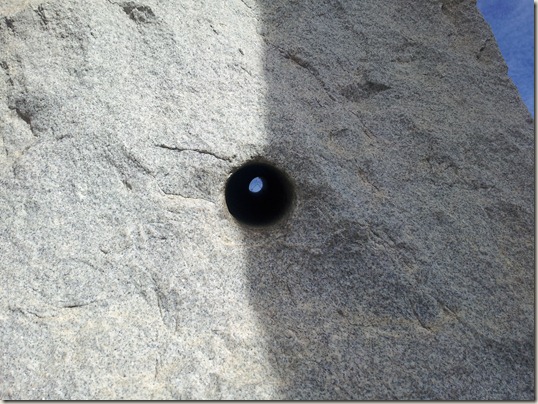 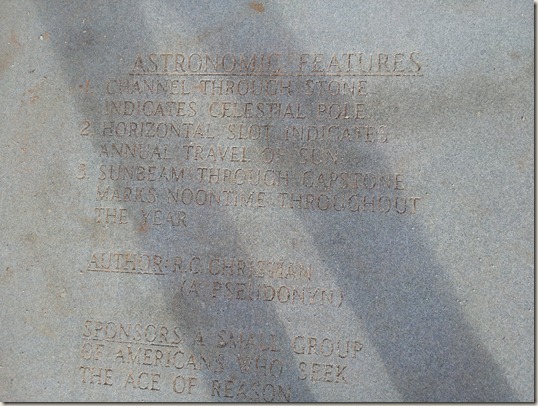 I suppose this neatness and clarity is the main problem I have with the whole project. Where’s the mystery? Unlike ancient, enigmatic Stonehenge, we have a detailed description of how it works. How can the Spinal Tap of 1000 years from now incorporate this into its inept stage show if there is no mystery to stoke its members’ imagination?

Also, as seen in the above photo, under the heading “Sponsors,” we are told that they are “A small group of Americans who seek the Age of Reason.” Great. The New World Order will be all about Cold Hard Facts. And militant birth control. Not that Reason in itself is a bad thing; we most certainly could use more of it in our current state, but the emphasis of this monument’s architectural rhetoric leaves no room for imagination, and this is where life is lived to its fullest (I guess I’m finally making the link to Arnold here).

For as much attention as the population limit gets, I find the fourth commandment to be more obnoxious:

Tempered Reason as the solution to all the problems caused by not only blind religious faith, but also by our loves and imagination. Methodical, Vulcan reason as antidote to our venomous, irrational humanity. I understand that it’s now orthodoxy to look down our noses at Religion and such things (this is a debate I don’t wish to engage in at this moment), but extending that to Passion? What would the world be like without passion? Limited to the mechanical measurements of 500,000,000 dull technocrats, I say. This deification of Reason confirms my biggest fears about the New Atheism. Once they take down Religion, who do you think is next? Bye bye Shakespeare. Whatever threat that Religion poses for Reason is inherent in the Humanities as well. The life of Faith and the life of the Mind share an elegant, symbiotic dance. This is, I think, some of the point Terry Eagleton was trying to make in his hilarious response to the God-debates in the book Reason, Faith, and Revolution.

The Jeremiad tone I take here is, of course, somewhat hyperbolic. I understand for instance that Christopher Hitchens lived an enviably imaginative life. I just hope that come December 22, the survivors have a say in amending R.C. Christian’s Bill of Rights and Responsibilities. This is why I love the picture of my energetic, irrational, beautiful daughter using the Guidestones as a jungle gym. It is the best use of these guidelines we can hope for.

I’m all for Reason, but not at the expense of Magic. 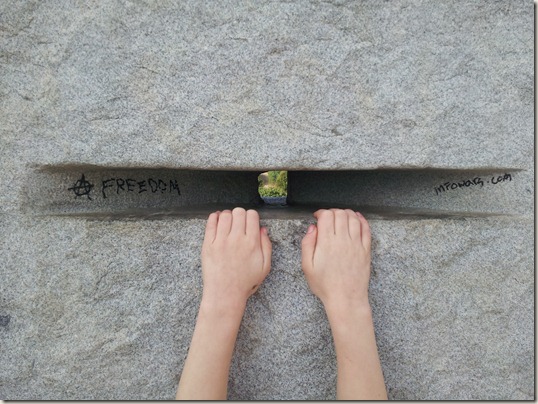 The anarchist graffiti was there when I showed up. Honest.